Congressman Goodlatte has signed on as a cosponsor of the Working Families Flexibility Act (HR 1180), introduced in February by Rep. Martha Roby (R-AL), which would erode overtime protections for American workers.

The Working Families Flexibility Act would amend the [Fair Labor Standards Act] to allow private-sector employers to “compensate” hourly workers with compensatory time off in lieu of overtime pay. Contrary to proponents’ claims, the bill does not create employee rights, it takes them away. It does create a new employer right—the right to delay paying any wages for overtime work for as long as 13 months. The legislation forces workers to compromise their paychecks for the possibility—but not the guarantee—that they will get time off from work when they need it.

The Working Families Flexibility Act would result in less money in employees’ paychecks, even when they do work overtime. Many employees rely on overtime pay to earn enough money to make ends meet every month—but this bill would allow employers to avoid paying overtime premiums when employees work extra hours, by giving them “comp time” to bank for future use instead. This means employees will still be working longer hours, but they will be receiving less in their paychecks at the time they work the longer hours. They will essentially be loaning their employer their overtime pay (at no interest) for as long as 13 months.

Goodlatte’s pattern of voting almost exclusively for the interests of employers over those of employees is reflected in his legislative record between 1993 and 2015, when only 9 percent of his votes supported workers and their families.

Congressman Goodlatte finally took time Monday to meet with some of the folks who have been active in the effort to get him to hold in-person open town hall meetings in the Sixth District.

Jennifer Kitchen of the SAW (Staunton-Augusta-Waynesboro) Action Movement– one of the participants– wrote about it here.

When pressed about holding a town hall meeting, even under tightly-controlled conditions, Goodlatte repeated that he had no intention of doing so “at this time.” He also repeated previous positions on health care and on President Trump’s taxes (no need to release them) and travel restrictions.

If this represents a new willingness by Goodlatte to engage with those who disagree with him, it’s an encouraging sign. If he thinks this will help take the pressure off, he’s surely mistaken. At any rate it won’t stop anyone from continuing to oppose him when he’s wrong. And it won’t stop his constituents from continuing to call for in-person town hall meetings.

It's #NationalParkWeek! Get out and enjoy one of Virginia's many parks. Entry is free April 22-23. #FindYourPark at https://t.co/mGKOwGuVCm. pic.twitter.com/1FNy7gvy7i

It would be even nicer if his voting record reflected a deep concern for protecting and improving the National Park system.

His votes in Congress on issues directly affecting the parks would suggest otherwise. 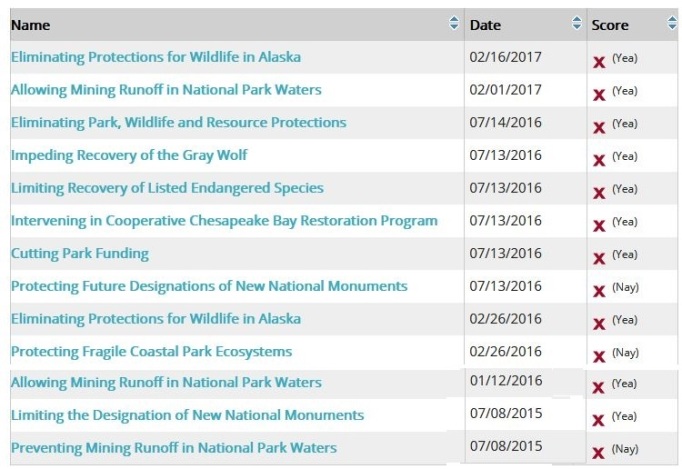 NBC29 reports that once again, constituents of Congressman Goodlatte gathered at one of his “Open Door” meetings to ask that Goodlatte himself (rather than only his staff) start showing up.

In a statement to the TV station, Goodlatte said:

I’ve always made it my priority to communicate with the people I represent, and I strive to be in communities across the district as often as possible. I meet regularly with groups or individuals who have requested appointments, attend community events, and correspond with constituents who have contacted my office via phone, email, postal mail, and social media. In addition, I have hosted telephone town hall calls and Facebook Live events that allow me to reach thousands of people at once and take questions from constituents as they all participate. I appreciate the input of all of my constituents, and I am looking at their town hall meeting requests.

If it looks familiar, that’s because it is almost identical to a statement Goodlatte made to the Staunton News Leader in February when he was asked when he last held an in-person town hall meeting in the Sixth District. He added the reference to Facebook Live events, which are even more impersonal than telephone town halls, but that’s about it.

So the message from Goodlatte is that he was “looking at” requests to hold town halls  and– two months later– he is still looking at them. Given his expressed fear of “mob scenes,” we have to wonder how seriously he is looking.

The Roanoke Times has published a letter by Chris Gavaler of Lexington with the latest example of how Congressman Goodlatte’s position on an issue is almost always determined by partisan political considerations rather rather than on the merits of the issue itself.

Bob Goodlatte said of Obama in 2014: “I think if he’s going to take action in Syria, or a broader range of actions, he should seek Congress’ authorization to take those actions.” When President Obama did seek authorization, Goodlatte opposed military action, saying “the use of chemical weapons is despicable, and I do not condone this attack on Syrian civilians,” but “I cannot support the proposed resolution pending in the Senate. Anytime our country enters into military action, we must consider the men and women of our Armed Forces who stand in harm’s way to serve our nation… I do not believe it is in the best interest of our Armed Forces and the United States of America to authorize the President’s proposed use of military force in Syria.”

Last week, after Syria again used chemical weapons, Trump took action without Congress’ authorization. Given Goodlatte’s stance against Obama, I assumed he would oppose Trump’s military strike. But in his newsletter sent late Friday, Goodlatte wrote: “This week’s deadly chemical attacks are a stark reminder of the atrocities that the Syrian people face under the Assad regime. This evil cannot be ignored or tolerated. The strike launched last night was a measured response to these actions by the Assad regime…” When Syria uses chemical weapons during a Republican’s presidency, it is “evil” and intolerable.

When Syria uses chemical weapons during a Democrat’s presidency, it is “despicable” but tolerable.

He should be asked to explain the difference in his reactions.

Congressman Goodlatte usually explains his zealous efforts to repeal the Affordable Care Act (Obamacare) by claiming it is in a “death spiral.” In fact he can’t seem to mention the law that has helped tens of millions of Americans (including more than 30.000 of his own constituents) to obtain health insurance without using that phrase.

But according to a report by Standard & Poor’s Financial Services, there is no “death spiral.” And such a thing could only happen if Republicans deliberately cause it.

“If the market continues unaffected, with a few fixes rather than an overhaul, we expect 2018, or Year 5 of the ACA individual market, to be one of gradual improvement with more insurers reporting positive (albeit low single-digit) margins,” the report states.

The report adds flatly that: “2016 results and the market enrollment so far in 2017 show that the ACA individual market is not in a ‘death spiral.’”

Still, the report warns that uncertainty due to Republicans’ actions in Washington could throw off this steady improvement in the market.

Goodlatte has been raising the alarm about increasing costs of health insurance. But if Republicans in Virginia would stop opposing expansion of Medicaid under the Affordable Care Act, health care premiums in the Commonwealth could be lower.

If Congressman Goodlatte can’t bring himself to endorse some common-sense fixes to the Affordable Care Act, he should at least stop trying to scare his constituents with his “death spiral” talk.

But the rest of us who live in the Sixth District haven’t been so privileged lately.

In fact the meeting notice posted the Republican Committee didn’t even mention that Goodlatte would be there– only that he (and other politicians) had been invited.

Although appearances by Goodlatte in the Sixth District are sometimes publicized, we usually don’t learn about them until afterwards. I’d hate to think he was making an effort to avoid constituents who might voice their disapproval of him and his record.

On Wednesday evening Congressman Goodlatte held another “Facebook Live” event during which he again avoided direct contact with his constituents and responded to a handful of selected questions submitted by viewers via Facebook.

Only two of the questions– the first two– were in any way challenging.

The first was actually two questions, and Goodlatte answered neither. They dealt with Goodlatte’s vote in favor of a resolution in Congress allowing internet service providers to sell and share personal information.

Members of Congress should represent their constituents’ best interests. How many of your constituents called or wrote asking that ISPs be allowed to sell their browser history without consent? Follow up question: how much money have ISPs contributed to your campaign coffers?

In fact ISPs like Comcast and Verizon have contributed tens of thousands of dollars to Gooldatte’s campaigns over the years, but he didn’t mention that. Instead he talked about how the regulations on internet privacy should be issued by the Federal Trade Commission rather than the Federal Communications Commission.

[T]he FTC does not have the authority to punish Internet providers that violate its guidelines. That is because of a rule that leaves oversight of those companies to the FCC.

As a result, [the] vote may release Internet providers from the FCC’s privacy regulation, but the FTC would also be unable to enforce its own guidelines on the industry without new authority from Congress.

The next question also failed to receive a direct answer:

I’m concerned about Executive Order that two regulations must be dropped before a new one can be activated. As government regulations are not all equal, what guidance will Congress give to deciding which regulations to roll back?

Instead Goodlatte, without citing any examples, suggested there are countless regulations that are outdated and need to be removed. That may or may not be the case, but it doesn’t explain why an arbitrary rule requiring two regulations to be discarded for every new one added makes any sense.

Gooldlatte continued to endorse President Trump’s efforts to issue an executive order banning travel ban from six Muslim-majority countries, while acknowledging that the first order in January should not have included Green Card holders. However at the time, Goodlatte fully endorsed that misbegotten order and even proudly took credit for allowing his Judiciary Committee staff to help write it.

Goodlatte also insisted that Congress would eventually act to repeal and replace the Affordable Care Act. And while noting the burden of high medical costs on low-income people, he defended the heartless refusal of Republicans in the Virginia House of Delegates to expand Medicaid under the ACA and provide health insurance to 400,000 working Virginians.