Efforts by Congressman Goodlatte and other Congressional Republicans to protect President Trump by undermining the credibility of the FBI have been crushed by a CNN report.

Emails obtained by CNN show the FBI agent at the center of a Capitol Hill storm played a key role in a controversial FBI decision that upended Hillary Clinton’s campaign just days before the 2016 election: the letter to Congress by then-FBI Director James Comey announcing the bureau was investigating newly discovered Clinton emails.

The new revelation about FBI agent Peter Strzok comes as Republicans accuse him of being sympathetic to Clinton while seeking to undermine Donald Trump during the heat of the 2016 campaign season.

Strzok, who co-wrote what appears to be the first draft that formed the basis of the letter Comey sent to Congress, also supported reopening the Clinton investigation once the emails were discovered on disgraced former Rep. Anthony Weiner’s laptop, according to a source familiar with Strzok’s thinking. The day after Strzok sent his draft to his colleagues, Comey released the letter to Congress, reigniting the email controversy in the final days of the campaign.

Last week Goodlatte alleged an anti-Trump “conspiracy” in the FBI based on messages criticizing Trump and supporting Clinton which Strzok exchanged with a colleague. Now it turns out that Strzok, far from protecting Clinton, helped write a letter that probably flipped the 2016 election to her opponent.
So, sorry, Congressman– no “conspiracy.” No “secret society”. Just an FBI agent doing his job despite his personal opinions.
Now can we move on to something more important– like the President of the United States improperly questioning the Deputy Attorney General about his personal loyalty?

As the Mueller investigation appears to zero in on President Trump himself, and as news emerges of Trump’s efforts to fire the special counsel last June, the President’s diehard defenders in Congress are in panic mode.

Among them is Congressman Goodlatte. As Politico reports:

On Fox News, Rep. Bob Goodlatte (R-Va.), chairman of the House committee that oversees the Justice Department and FBI, alleged an anti-Trump “conspiracy” by FBI agents whose text message exchanges have been made public in selective bursts by GOP lawmakers.

“Some of these texts are very disturbing,” Goodlatte said, adding, “They illustrate a conspiracy on the part of some people, and we want to know a lot more about that.”

Congressional Democrats say it’s no accident that the GOP probes have escalated as Mueller has homed in on Trump’s top allies. Reps. Adam Schiff of California, Jerry Nadler of New York and Elijah Cummings of Maryland, the top Democrats on three GOP-led committees unearthing internal FBI documents, say the Republican efforts smack of a partisan campaign to protect the president and sully the investigators who have questioned his behavior.

Noah Rothman, an editor for the conservative Commentary magazine, observed on NPR Friday morning: “Over the course of the last year, something has taken hold among Republican legislators and the Republican base that seems convinced that this President is a victim of a concerted effort behind the scenes by members of the FBI to sabotage this administration.”

Rothman said Congressional Republicans “got way out over their skis on this and suggested the conclusion that they were implying outright, which was that there was a concerted conspiracy, a shadow organization within the FBI, exposed by these anti-Trump texts from a former member of the counter-intelligence division of the FBI who ended up on the Mueller probe for about six weeks. And the suggestion was outright, from people like Representative Bob Goodlatte, that this was a conspiracy. Using that word. And we’ve since seen a lot of these texts in in their appropriate context, and it seems as if this was really overblown, to the point now where you have to wonder whether some credibility has been lost by these Republican members. And if you’re a Republican and a conservative, you should be furious over this.”

This isn’t the first time Goodlatte has squandered his credibility in support of Trump. I suspect it won’t be the last time before he exits Congress at the end of the year.

As the federal government approaches a possible shutdown, Congressman Goodlatte and other Republicans are scrambling to place the blame on Democrats. 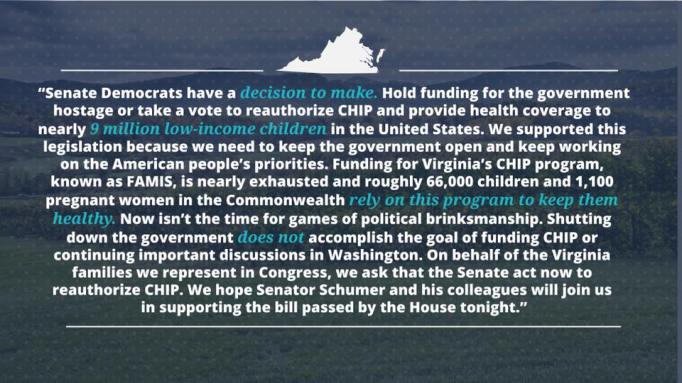 Goodlatte and other Republicans refused to pass a simple bill to fund the Children’s Health Insurance Program (CHIP) as the Democrats wanted. Instead they passed a bill funding CHIP only with cuts to other vital federal health programs. Now they are suddenly willing to extend it with no conditions in an effort to avoid compromising on a plan to protect DACA (Deferred Action for Childhood Arrivals) recipients who were brought to the US illegally as children.

With Goodlatte’s encouragement, President Trump rejected a bipartisan compromise on DACA– which is why there is an impasse now.

In 2009 Goodlatte voted in Congress against a law that extended CHIP coverage to four million children without health insurance. Does anyone believe CHIP has now become his primary concern?

The cynicism and deceit are breathtaking.

A new Washington Post report on the White House meeting last week where President Trump spoke abusively about immigrants to the US from Haiti and Africa makes two things clear:

— Congressman Goodlatte, who was at the meeting, raised no objection to Trump’s racist remarks.

— Goodlatte helped kill a bipartisan agreement on immigration that would extend protections for DACA recipients who were brought to the US illegally as children.

Trump told the group he wasn’t interested in the terms of the bipartisan deal that [Democratic Senator Dick] Durbin and [Republican Senator Lindsey] Graham had been putting together. And as he shrugged off suggestions from Durbin and others, the president called nations from Africa “shithole countries,” denigrated Haiti and grew angry. The meeting was short, tense and often dominated by loud cross-talk and swearing, according to Republicans and Democrats familiar with the meeting.
…..
White House Chief of Staff John F. Kelly was in the room and was largely stone-faced, not giving any visible reaction when Trump said “shithole countries” or when he said Haitians should not be part of any deal, White House advisers said.

At one point, Graham told Trump he should use different language to discuss immigration, people briefed on the meeting said.

As Trump batted back the Democrats, he was urged on by Republican lawmakers. Rep. Bob Goodlatte (R-Va.) told Graham and Durbin their proposal would not fly, and he told the group they should instead embrace his more conservative bill. Durbin was not interested, White House officials said.
…..

[S]ome White House officials, including conservative adviser Stephen Miller, feared that Graham and Durbin would try to trick Trump into signing a bill that was damaging to him and would hurt him with his political base. As word trickled out Thursday morning on Capitol Hill that Durbin and Graham were heading over to the White House, legislative affairs director Marc Short began to make calls to lawmakers and shared many of Miller’s concerns.

Soon, Goodlatte, one of the more conservative House members on immigration, was headed to the White House. Trump also called House Majority Leader Kevin McCarthy (R-Calif.) and asked him to come, McCarthy said. Sen. David Perdue (R-Ga.) and Cotton were also invited to rush over.

So when Trump changed his mind and decided he didn’t want a bipartisan compromise on immigration after all, Goodlatte was more than willing to help scuttle the plan– while failing to raise any objection to Trump’s vulgar dismissal of immigrants from certain countries.

And now Goodlatte won’t even speak about what happened at the meeting. This is a complicit and dishonorable man who cannot leave Congress soon enough.

"Out of the mountain of despair, a stone of hope." – Today, we honor the message and legacy of Martin Luther King, Jr. #MLKDay pic.twitter.com/dF2t9sw3re

In view of Goodlatte’s craven silence about President Trump’s appalling and racist remarks about immigrants at a White House meeting Thursday which he attended, I would like to remind the congressman of another quote from Dr. King:

The Washington Post reports that Congressman Goodlatte was at the meeting Thursday at the White House where President Trump reportedly complained about immigration from “shithole countries” like Haiti and the African countries.

The scene played out hurriedly in the morning. [Senator Lindsey] Graham and [Senator Dick] Durbin thought they would be meeting with Trump alone and were surprised to find immigration hard-liners such as Rep. Bob Goodlatte (R-Va.) and Sen. Tom Cotton (R-Ark.) at the meeting. White House and Capitol Hill aides say Stephen Miller, the president’s top immigration official, was concerned there could be a deal proposed that was too liberal and made sure conservative lawmakers were present.

For what it’s worth, Trump has denied using the term “shithole.” But Senator Durbin affirmed the president did just that.

So what has Goodlatte had to say about this? Nothing so far, on his website, his Twitter feed or his Facebook page. Will he back up Trump’s denial or will he tell the truth? (Most likely he’ll do neither explicitly.) And will he finally work up the nerve to utter a critical word about the president?

Congressman Goodlatte is among a large and increasing number of federal legislators (mostly Republicans) who have announced that they won’t seek reelection this year. They are featured in an article at Politico.

While the retiring members expressed a number of different complaints about the way Congress functions (or malfunctions), Goodlatte was quoted as saying:

“One of the problems with the internet is it creates a sense on the part of some people that it’s all just a referendum.”

It’s not exactly clear what Goodlatte means, but it’s possible he is expressing frustration with the amount of online criticism he he has been receiving from Sixth District constituents since the 2016 election and his loyal support for President Trump’s agenda. While we have no idea of the ratio of support to opposition he receives via email (he never told us how many messages of opposition he got for his efforts to repeal the Affordable Care Act compared to messages of support),  his Facebook page and Twitter account are filled with overwhelmingly hostile comments on his positions on health care, taxes, net neutrality and other issues.

If Goodlatte is so unhappy with internet “referendums,” you might think he would long for face-to-face contact with his constituents so he can hear and respond to their concerns directly. But of course, he wants no such thing. He hasn’t held an in-person town hall since 2013 and has shown no signs of wanting to do so again before he leaves Congress.