Reacting to the news that FBI agent Peter Strzok has been fired after a contentious Congressional hearing co-chaired by Congressman Goodlatte, Bobby Goodlatte lets us know what he thinks of his father’s actions. 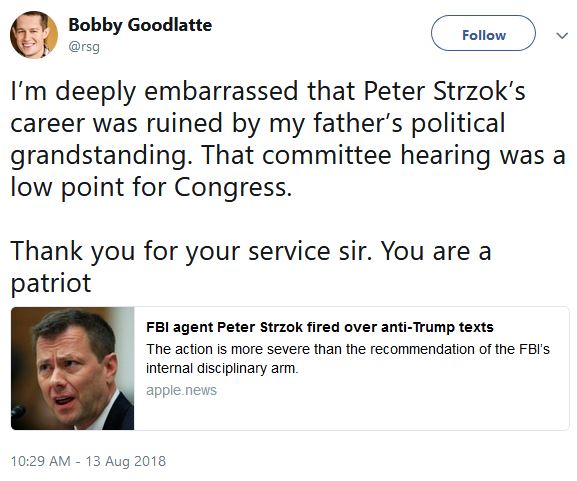 Aitan Goelman, Strzok’s attorney, said FBI Deputy Director David L. Bowdich ordered the firing Friday, even though the director of the FBI office that normally handles employee discipline had decided Strzok should face only a demotion and 60-day suspension. Goelman said the move undercuts the FBI’s repeated assurances that Strzok would be afforded the normal disciplinary process.

“This isn’t the normal process in any way more than name,” Goelman said, adding in a statement, “This decision should be deeply troubling to all Americans.”

And this from a reporter for Politico:

Importantly, DOJ’s internal watchdog says no evidence showed any aspect of the Clinton investigation was affected by bias. https://t.co/1bVIhPxQDn

A message from the son of retiring Republican Congressman Goodlatte:

I hope Congressman Goodlatte is proud of raising a son capable of thinking independently of his father. He should be.